Our Family
Serving Your Family

FIND US ON DELIVEROO!

YOU CAN NOW ORDER YOUR FAVOURITE JACKSON’S DISHES STRAIGHT TO YOUR DOOR!

Scan QR code below to place your order 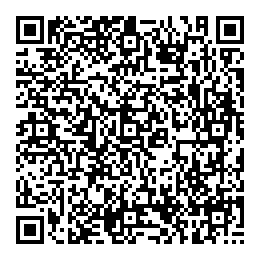 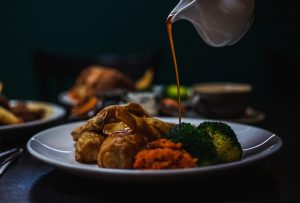 Join us at the cafe every Sunday for our mouth-watering Sunday roast lunches. Serving at least two meats and a Vegan Wellington every week.

All served with the usual tasty trimmings.

Want to takeaway? Not a problem, call us from 12pm on 01189730776 when you would like to palce your order and we’ll let you know what time it will be ready to come and collect.

ORGANISING A GET TOGETHER? WE CAN NOW TAKE BOOKINGS OF TABLES OF SIX OR MORE. PLEASE CALL US ON 01189730776 TO SPEAK WITH A MEMBER OF STAFF TO RESERVE A TABLE.

Join us from 12pm-3pm every week for a smaller portion of your Friday favourite. 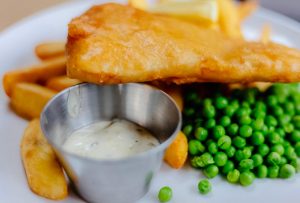 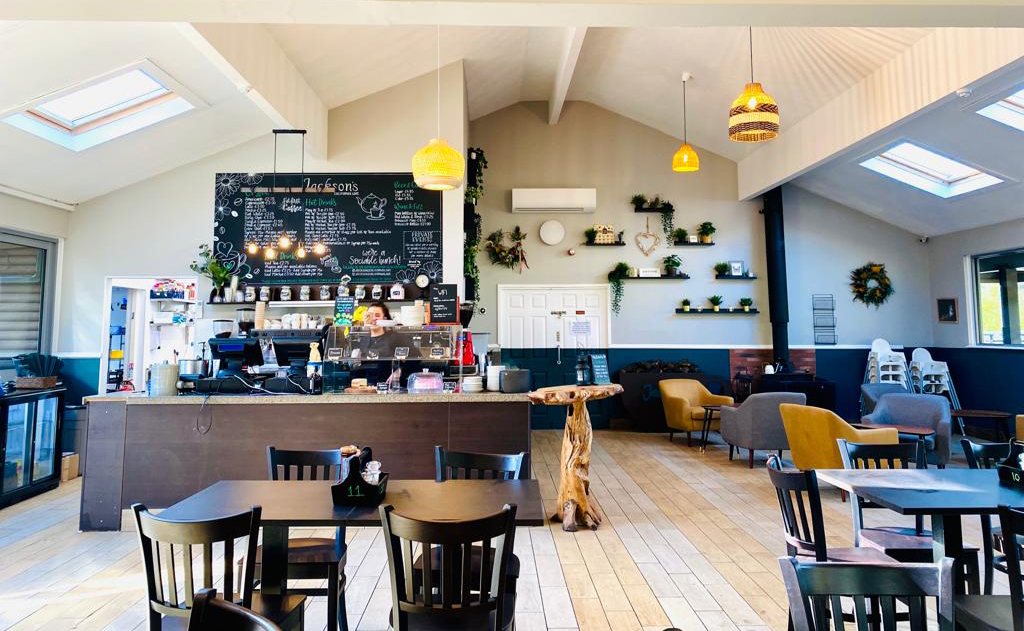 The Jackson’s Family have run the café centred in the beautiful surroundings of California Country Park for 8 years now and have seen the park change dramatically! This year we had a BIG refurbishment inside the café (which has been long overdue) and have FINALLY completed our customer toilets, which is a good job with the weather taking a turn for the worse!

If you’re looking for the perfect day out, then California Country Park is where you want to be! There is a newly refurbished play park – perfect for children of all ages, a stunning (buggy friendly) lake to stroll around & of course our wonderful café!

Whether you’re wanting breakfast, lunch or just a little naughty treat, you can get it all at Jackson’s. We specialise in locally sourced, freshly made produce and change our menus seasonally to ensure we have the most delicious food on offer for you – we LOVE food at Jackson’s and want to share our love of food with you.

Please be aware that we do not take bookings during the school holidays (no matter what the party size) in the cafe as all of our tables are on a first come first serve basis. We advise large table numbers to arrive early to avoid disappointment.

Please be aware that we only allow guide dogs or assistance dogs inside the cafe. We have a large seating area available outside that is dog friendly.

AMAZING FUN PARK FOR ALL AGES

California Country Park is beautifully scenic and has a rich history (see below for more information if it interests you!) that you can’t help but be engulfed in when you walk around the grounds. A large ecosystem of wildlife floods the park and there are lovely walks all around the area that are relatively short, making it perfect for families and those who want to take a leisurely stroll that isn’t too time-consuming. Throughout the walks, you will find information boards pointing out particular wildlife and plants, as some are protected species linked directly to the area.

The circular walk around the lake is fully pathed and buggy/wheelchair friendly, but there are also some rougher walks that lead into the woods (these will not be suitable for buggy/wheelchair users) however, the walk is easy as the ground remains flat – although it may be muddy at times after heavy rainfall and during winter, so bring your wellies! You can feed the ducks and birds around the lake and bird food is available to purchase from inside the cafe.

Picnic tables are situated around the lake for your use, as well as benches next to the lake to sit and take in the peaceful views, in every season. In Autumn – the glorious rainbow of colours from the different trees’ leaves floods the area surrounding the lake like a blanket. In winter – looking at the frost whilst it glistens on the lake is breathtaking; wrapping your icy hands around a Jackson’s hot chocolate whilst your nostrils sting from the cold air – a perfect winter’s day.  The Spring – at the park you see mother nature in all her glory-baby goslings and ducklings chasing after their mothers, the preparation beforehand of the swans building their vast nests and the budding trees finally showing some signs of life after the empty branches of the winter to show summer is approaching. The Summer – feeling the warmth of the sun as it shines down over the lake brimming with wildlife is truly magical, the happy sounds of children’s laughter as you gaze upon people beaming with ice creams and drinks in hand – yes California Country Park really is a place of natural beauty that we are lucky to bestow – why not come and see it for yourself and see what all the fuss is about!

There is a large amount of parking available at the park. There is now electric car-charging points, disabled parking and motorbike parking also available. During peak times, there is also an overspill car park so you will always fine a space! Please be aware that we are not linked with the car park as it is run by Wokingham Borough Council. It is pay and display or pay by card/RingGo app. Pricing varies seasonally, please see the website below for charges.

The paddling pool is now open for the summer holidays! Please see the website below for ticket information and opening times as this changes yearly. Please be aware that during peak times the paddling pool must be booked in advance.

The History of California Country Park

It is commonly thought that California Country Park is named after the American state, however, early records show that the area has been named ‘California’ since at least 1761 – some 15 years before the American state was named.
In medieval times, California, along with its neighbour, Longmoor, formed part of the royal forest of Windsor and was used and managed extensively as royal hunting ground. It remained hunting ground to Queen Victoria Buckhounds until the early 1900s.

In 1873 John Walter, founder of the times national newspaper, took over the area from his estate in Bearwood for the use of brickmaking. Walter’s home, Bearwood house, was built from 4.5 million bricks from the brickworks at California and the times newspaper building at Printing House Square in London was also erected using bricks from these works.

The Walter family made a significant impact on the local landscape, as excavation from the clay works resulted in an enlarged Longmoor lake, which is the central feature of the park today. Walter was also responsible for the planting of the well-known wellingtonias around the area.

However, many members of the Walter family were lost during the great war of 1914-1918, resulting in heavy death duties. To pay these duties the land was put up for sale. Enticed by low land prices and the appeal of the country, many ex-servicemen bought up the land as small holdings, but increasing tariffs on food stuffs and rising prices forced many farmers to sell up a few years later.

During the 1920s, Mr A Cartlidge bought up areas of California and operated mystery coach tours to Longmoor Lake from London. This proved very popular, and Mr Cartlidge decided to give the area a more permanent tourist feature – ‘California in England’ holiday camp.

This idea was well ahead of it’s time, intending to give the UK a flavour of California USA, as it was perceived from Hollywood at the time. The day camp proved a huge success and, during its heyday in the 1930s, attracted coachloads of day-trippers and holidaymakers from London and it’s surrounding area.

Camp entertainment facilities included a ballroom with a famous floor made up of glass squares which lit up in different colours. Reputedly, the glass floor came from Crystal Palace, which is likely, given Mr Cartlidge’s reputation for self sufficiency and recycling! The ballroom became a very popular entertainment venue for live bands (and an excellent pianist who played during the intervals).

During the second world war, the ground floor of the pavilion was converted into a factory, providing engineering work for aircraft. Mr Cartlidge was himself an accomplished engineer, having worked at the royal aircraft factory during the first world war. Meanwhile, the ballroom continued to operate dances on Sunday evenings and provided entertainment for many service men and women in the surrounding area.

The site also became renowned for its infamous speedway motorcycle racetrack, which operated from the 1930s to 1950s. Sometimes staging national championships, it drew large crowds and produced many well-respected racing riders in higher-grade racing. The riders still meet once a year, in October, at the park to share their memories and some bring along their old bikes to put on display.
After the 1950s, ‘California in England’ became less popular as newer holiday camps, such a Butlins, entered the scene. Competition, combined with greater choice and more accessible air travel, led to the gradual decline of the holiday camp.
The ballroom became a nightclub during the 60s but was burnt down in 1976, never to be rebuilt. During the 1970s, the district council began to acquire the land at California and dedicated some areas as a site of specific scientific interest.
The park has been recently updated with a new car park, improved roads, walking paths, and a brand-new play park (in 2020). The paddling pool remains a huge hit with children in the hot weather and is open during the summer holidays. Our café, Jackson’s, joined the park in 2013 and has just undergone a large refurbishment to meet the demands of the increasing footfall in the park.
The park has provided interest and excitement for generations of visitors. The outstanding natural beauty of the area, fascinating wildlife and improved facilities make California Country Park a ‘must visit’ attraction, today and into the future.

For more information about the holiday park and its history, please see the following website: